For Remembrance Day, we remember how an unassuming Victorian found himself in command of one of the world’s deadliest armies
By Tristin Hopper 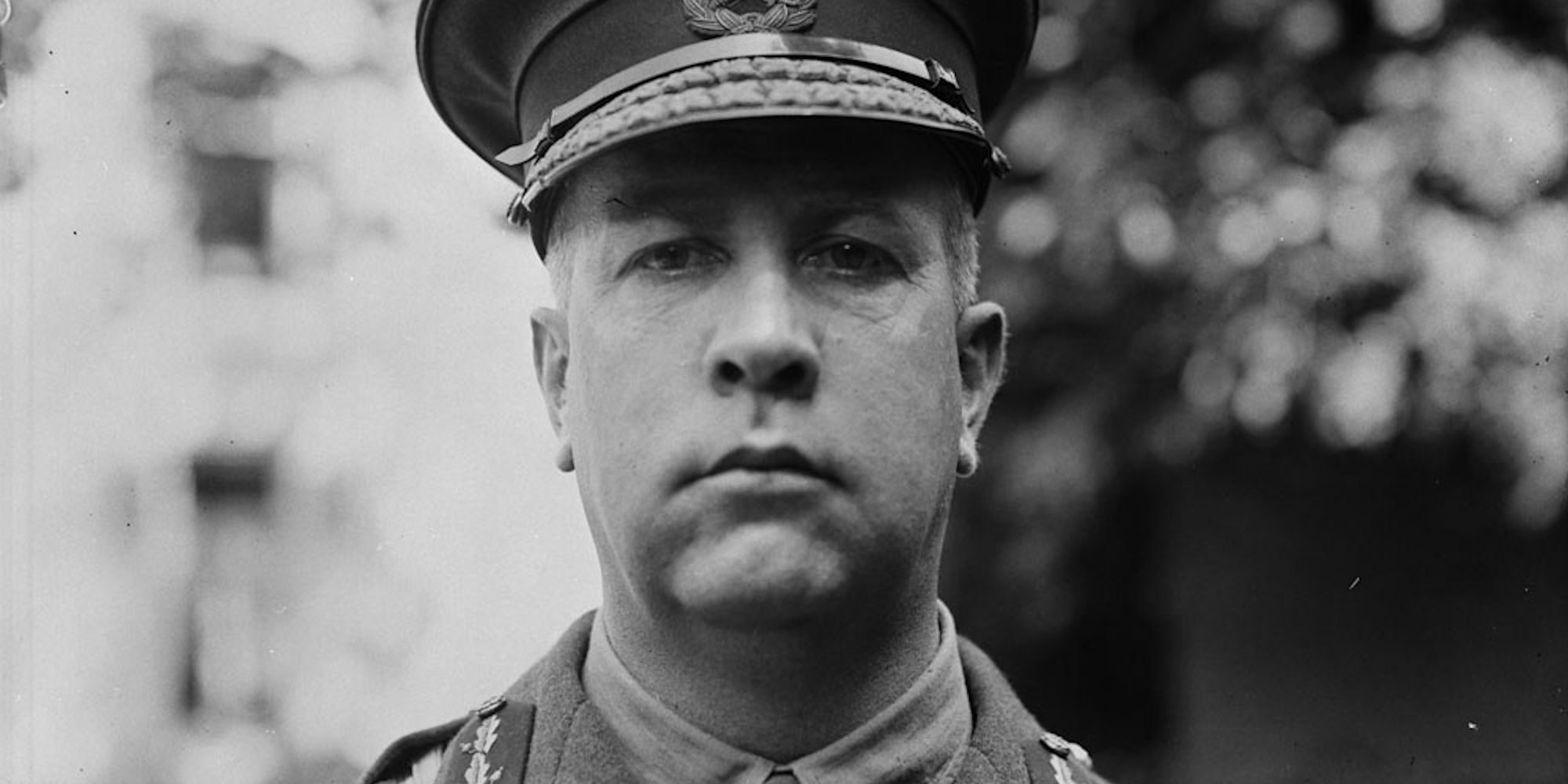 Victoria’s Arthur Currie wasn’t charming, well-connected or well-educated. He got crippling stomach pains during periods of high stress, which had caused him to miss the Boer War. In an era of wiry men with distinguished moustaches, Currie was doughy and clean-shaven; few would encounter him without mentioning his enormous girth. In the words of one author, he was “embarrassingly unassuming in appearance and bearing.”

The 40-year-old had been a disastrous real estate developer; on the eve of the First World War he was so ridden by debt that he would embezzle the equivalent of $250,000 from the reserve militia where he was an officer.

Within only two years, however, this was the man picked to stand as the most powerful Canadian who had ever lived. Currie was placed in supreme command of the deadliest army his home country has ever assembled. And in one of the most meteoric ascensions in Canadian history, a man who had exuded little more than stable mediocrity in Victoria would become an unparalleled bringer of death and destruction to Europe.

When Currie had first come to Victoria from Ontario in the 1890s, he had gotten work in Victoria and Sidney as a schoolteacher. He then left to get into real estate, following a path familiar to many modern Victorians: Effortless climbing a real estate bubble, only to be left over leveraged and in ruins when it burst.

But it was Currie’s extracurricular activities as a member of the local militia that would unwittingly place him in the limelight. Joining a Canadian militia in the 1890s was akin to joining a yacht club; it was mainly a good place to find business contacts and secure dinner invitations. But Currie ended up taking the militia far more seriously than most. He pored over military textbooks and absorbed every class or exercise the military could serve up. “When some of my associates were playing lawn tennis or swinging golf clubs, I was at the armouries or on the rifle ranges with the boys,” he would say later.

Under normal circumstances, Currie’s martial enthusiasm would have amounted to little more than an unusual hobby. But Currie lived in the early 20th century, just as Europe was descending into armed, mechanized chaos. As Canada scrambled for officers to command its rapidly swelling volunteer army for the Western Front, Currie found himself on a troopship in charge of the 2nd Infantry Brigade.

Once in Europe, the Victorian quickly rocketed through the ranks until he was commander of all Canadian soldiers in Europe. Not only did Currie keep orchestrating battlefield successes, including the legendary victory at Vimy Ridge, but in a war of tragically mediocre generals, fellow allies began to notice that the overweight Canadian seemed to be the only one who knew what he was doing.

“There was something great and terrible in his simplicity and sureness of judgment, and this real—estate agent … was undoubtedly a man of strong ability, free from those trammels of red tape and tradition which swathed round so many of our own leaders,” wrote the British war correspondent Philip Gibbs.

The British prime minister of the time, David Lloyd George, would call Currie “the only soldier thrown up by the British side who possessed the necessary qualifications for the position.”

In Victoria, Currie had been unable to hold together a minor real estate concern. But when thrown into the worst carnage humanity had ever seen, he thrived as a master of strategy, organization and calm.

“He has made war a business,” one British general would explain of the Canadian. “He is the managing director; his working capital is the lives of 125,000 Canadians. He carefully watches his expenditure and mentally keeps a profit and loss account of each engagement, and his dividends are many.”

Currie was surrounded by fellow Allied commanders who refused to acknowledge the realities of modern war. Sir Douglas Haig, commander of the British Expeditionary Force, never abandoned the romantic notion that the war would be won with cavalry charges. French commanders had been so wedded to tradition that they had sent their soldiers into battle wearing bright red trousers. Even generals in the savvier German ranks had sent countless doomed infantry charges into machine gun fire.

He grilled fellow allied generals on strategy. He relentlessly picked apart prior battles and had a particular genius to determine what caused certain attacks to succeed and others to fail.

One of the most telling indicators of Currie’s eerie meticulousness came in the aftermath of the Battle of Passchendaele. Currie had attempted to resist Douglas Haig’s orders to capture the inconsequential Belgian village, arguing that it would cost 16,000 Canadian casualties. When he was overruled, he turned out to be almost exactly right; the battle ultimately cost 15,654 Canadian casualties.

Currie may have been fighting an analytical war, but it was no less brutal. He followed the cold calculus of killing as many Germans as he could – as often as he could – believing it the fastest way to restore peace to Europe and bring his men home. Under his leadership, the Canadian Corps became the most enthusiastic users of poison gas on the Western Front. Canadians shot at anything that moved, and bombarded rear German positions constantly.

After the war Currie would shock audiences with his raw, visceral descriptions of battle. “We gassed him on every conceivable occasion, and if we could have killed the whole German army by gas we would gladly have done so,” he would say in one speech. But the general wasn’t being boastful; he was trying to debunk any remaining 19th century notion that war was a glorious spectacle.

One of Currie’s legacies is that he didn’t needlessly waste the lives of his soldiers. Unlike so many other First World War battles, Curries’ didn’t feature human wave attacks against entrenched German defences. He intricately planned every offensive, ensuring he never sent men into battle without proper training and artillery cover. But it didn’t mean that Currie showed any hesitancy in wiping out whole towns’ worth of young men in pursuit of ultimate victory. “General Currie … did not spare his men,” wrote Philip Gibbs. “He led them forward whatever the cost.”

To this day, nobody has sent more Canadians to their deaths than Arthur Currie. On virtually every cenotaph across the country, there is likely at least one name of a soldier who died fulfilling a strategy that was conceived, planned or approved by Currie. The general’s orders would doom thousands more to lives without limbs, without faces, without sight and without sanity.

This earned Currie no friends among the men he commanded. They began to suspect, quite accurately, that their fates were in the hands of a cold, emotionless tactician. Most notoriously, Currie had continued to order attacks right up to 11 a.m. on November 11, hours after it was announced that an armistice had already been signed. One soldier, Jim Mills, would even vow to kill Currie after his brother Tom was killed only minutes before the ceasefire. The assassination was only derailed by a quick-thinking officer getting Mills so drunk that he became unable to hunt the Canadian Corps commander.

Currie, in turn, was known to show a stunning lack of empathy for what he had put his men through. In one instance, he observed a group of exhausted Canadians returning from the trenches and said cheerfully “that’s the way I like to see you, covered with mud and blood.”

The war had shattered a young Canada, but it had set Currie on a dizzying path to power. Only four years after he had been a small town militia officer with financial problems, the bookish, overweight Victorian had been transformed into a conqueror.

By the end of 1918, Currie would be on horseback, triumphantly leading an army of occupation over the Rhine River into the heart of a defeated Germany. Europe showered him with awards, including the French Legion of Honour, the Belgian Croix de Guerre and a knighthood. He was the era’s Wayne Gretzky; the one Canadian most foreigners could name.

His home country, however, wasn’t nearly as enthusiastic. Canada may have liked the victory that Currie won for them, but the war had been so destructive that the general often found himself cast aside as a symbol of all that had been lost.

Currie would get a few plum postwar positions such as principal of McGill University, but he quickly found himself unwelcome in a peacetime army. The federal cabinet refused to award him a pension. At public events he occasionally faced hisses from widows. Sir Sam Hughes, an MP and rival of Currie, accused him in the House of Commons of “needlessly sacrificing the lives of Canadian soldiers.” In the late 1920s, Currie sued an Ontario newspaper for libel for making the same claims, and although he won, the jury only awarded him a token $500.

Nowhere is Currie’s vanished reputation more visible than in the city that produced him.

He is one of the most consequential figures to ever emerge from the B.C. capital. Without Currie in the picture, it’s arguable that Remembrance Day wouldn’t even fall on November 11th. And yet even Victoria seems to have been eager to forget him. The city has no Arthur Currie School or Arthur Currie Armoury. In fact, the only landmark that seems to bear his name is Arthur Currie Lane, the short, Vic West street where he used to live.‍

A daily summary of what’s happening in Victoria

The Early History of the Royal Arch

The “Vatican” of the Knights Templar? – BBC REEL

You may also enjoy

A Poem – Thoughts of a Mason’s Wife

The Evolution of the Masonic Apron

Admiral McRaven | One of the Best Motivational...

The History of Royal Arch in B.C. and...

A Conversation About Perceived Value.

21 Signs That You’re A Freemason